As a company with a commitment to Andorran society, Group Hiper Pas supports different initiatives that promote the cultural development of the Principality, such as the Andorran Opera Season.

Working to ensure the organisation of a stable season in the Claror auditorium is the Associació Andorra Lírica, which was created in 2016 to promote lyric art in the country and which Group Hiper Pas has sponsored since April 2021. Its general and artistic director is Jonaina Salvador. Born in 1987, this soprano studied singing and piano in Andorra, Barcelona and Paris, which she also transmits as an enthusiastic teacher. Want to know more about Jonaina Salvador and Andorra Lírica?

Although she recognises that “every singer is a world of her own and what feels good to one does not work for another”, she avoids eating these two foods because they irritate her tongue and palate. “Finding the balance between not having an empty stomach and not feeling bloated is always a challenge for me before singing. As for drink, it's important to stay hydrated,” she adds.

“Our tool is our body”, emphasises Jonaina Salvador, who expresses the importance of taking care of body and mind. “Healthy habits, physical exercise, staying in shape to be able to play any role that requires a lot of energy. It takes many hours of study at different levels”, she points out. She explains the different phases to prepare a new role: reading the libretto to understand the characters, the discovery of the score through a musical reading with the text, the interpretation of the text and the musicality, and the analysis of the character. “The psychology of the character is written by the composer in the music itself. We performers must pay attention to every detail in order to serve the text, the music and the character”, she says.

During its seven seasons, 25 self-produced shows have premiered in the country, with a mixture of lyrical genres. Moreover, they have been able to export shows over the borders to renowned theatres and festivals.

This is the purpose of the association. One of the artistic and social riches is the mix between high-level artists from all the world’s opera houses with high-level artists from Andorra, as well as the interdisciplinary collaboration between various cultural entities in the country. “These interdisciplinary and transgenerational cultural encounters are very enriching for the entire cultural fabric and opera is an ideal platform for this”, she adds. Beyond the shows, Andorra Lírica also has a social and outreach programme, creating lyrical workshops at the Nuestra Señora de Meritxell Specialized School and schools within the different educational systems, as well as the creation of the monthly lyrical radio programme called “toi toi toi”on RTVA.

Andorra Lírica has a loyal audience that follows all its productions. With shows lasting a maximum of two hours and designed for a family audience, there are audiences of all ages. It welcomes both regular opera-goers as well as audiences who discover the lyrical genre for the first time and who end up becoming fans.

Jonaina Salvador began her piano studies at the Institut de Música d'Andorra and later graduated from the Conservatori Superior del Liceu de Barcelona, ​​while studying singing at the same time. She perfected her singing studies in Paris and gradually found that singing “was becoming more and more important in my life, until it won out over the rest”. “In any case, all the disciplines I have trained in are very complementary as a musician, as a teacher and as a person. As performers (and as people) we are always in a permanent state of learning and evolution”, she adds.

She has loved painting since she was little and uses here talent to paint the season’s posters . She also really likes handicrafts, as well as dancing, reading and “continuing to learn”.

Jonaina Salvador explains that if this dish is on a restaurant menu, “it is very likely that I’ll have it, I love it! Probably because of my years in Paris.” On the other hand, she affirms that there is no potato omelette on earth like her mother's, and of her grandmother she remembers that all the dishes had  a “special flavour”, such as grilled escalivada. “At home we enjoy good cooking and it is also a pkease time to share with the family and friends you love”, she explains.

Although she usually does her everyday shopping in local shops near her home, she goes to River Centre Comercial “for large purchases or for specific products that I love”, since that is where she always finds them.

She really likes the Granier space in River Centre Comercial for a relaxing break. The raisin and walnut bread is a temptation for her, although she really likes the variety of breads to choose from and the sweet and savoury selection they have to offer. 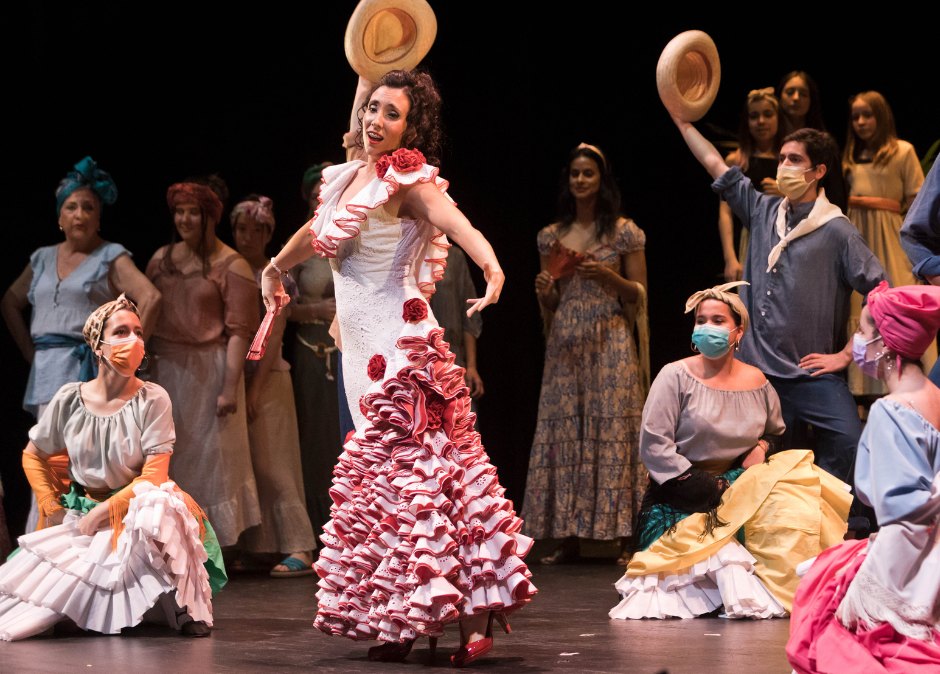